Church of the Holy Sepulchre, Jerusalem

Church of the Holy Sepulchre

Church of the Holy Sepulchre is one of the most unusual structures, let alone, "churches," I've visited in my history of exploration. A maze of pathways, domed rooms, grand halls and seemingly subterranean chambers, controlled by different orders of Christianity hide in the old city. Somehow it is both built grandly on a hill, but hidden around the corner amongst the alleys and bustle of vendors, tourists, and food markets.

The Church is thought to contain both the site of the crucifixion as well as Jesus's empty tomb. The Church was consecrated in the year 335 and is currently divided amongst the Roman Catholics, Greek Orthodox, Armenian Apostolic, Coptic Orthodox, Syriac Orthodox, and Ethiopian Orthodox denominations. 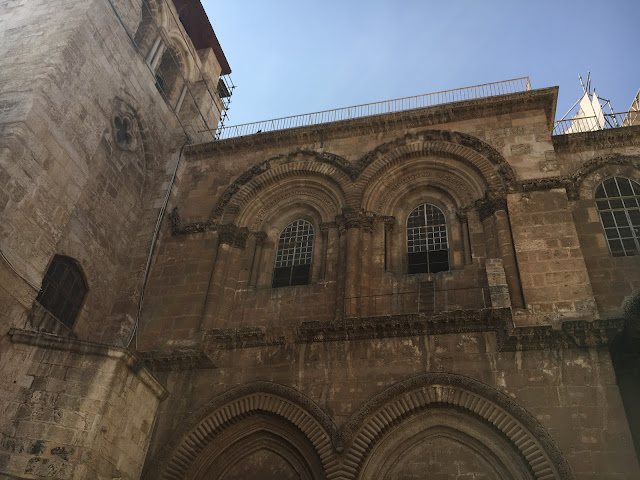 In this view of the main entrance a ladder can be seen below the left of a pair of windows. This ladder is known as the immovable ladder and is called such because the denominations who run the church agreed in the 1800s to keep the building in its current state, including ladder placement. 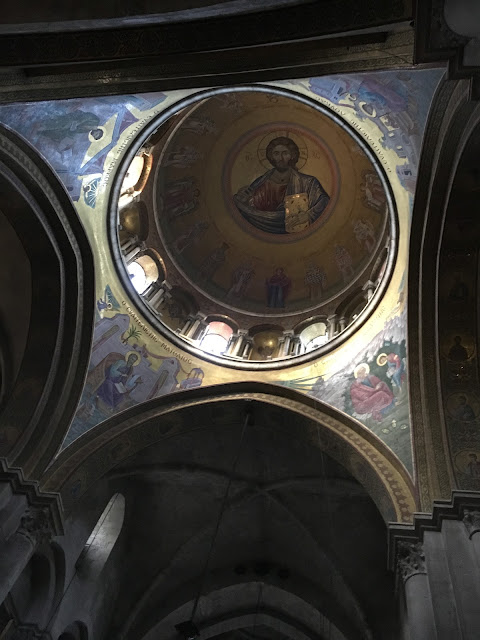 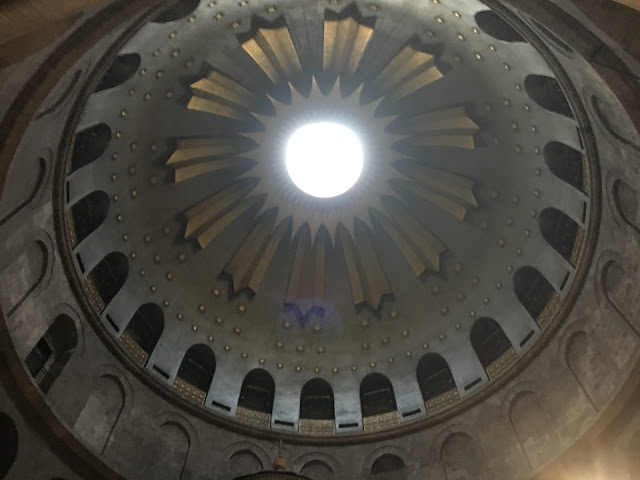 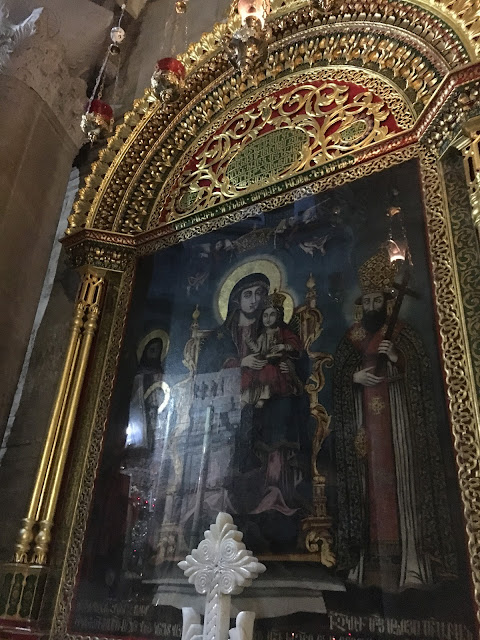 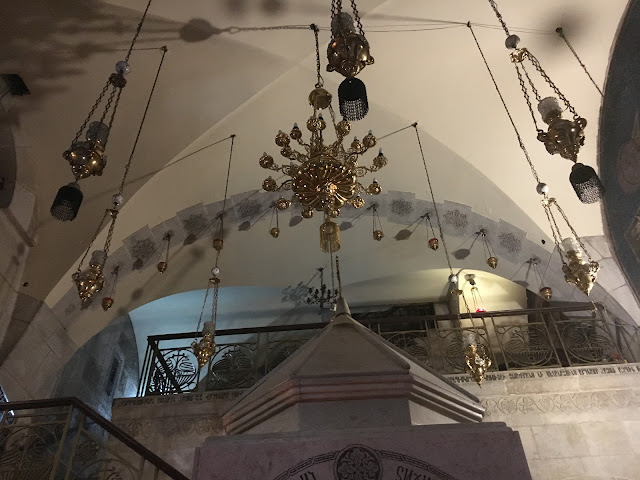 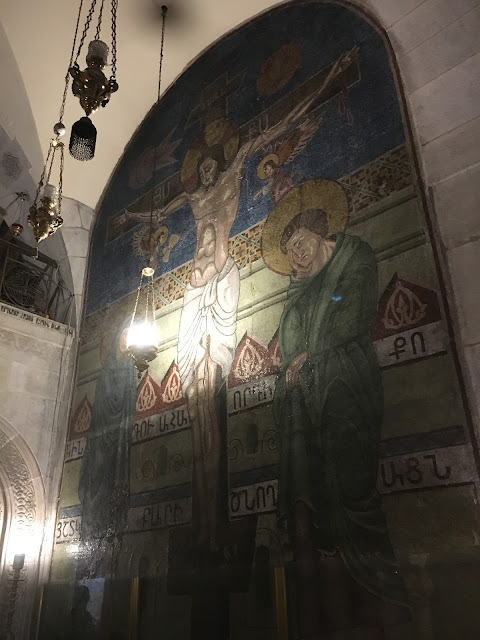 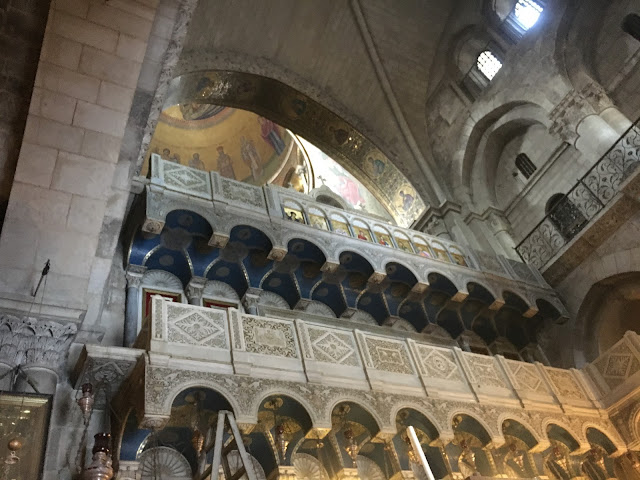 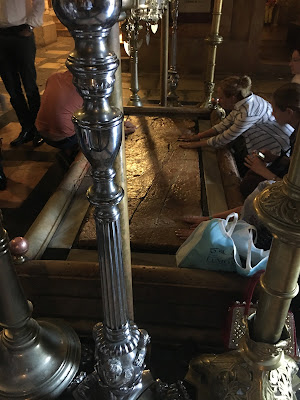 Substantial details on the history of the very complex church can be found on Wikipedia. The marble slab shown above is where Jesus's body was thought to have been laid after the crucifiction. Today pilgrims rub clothes on the stone with the idea that this may give them miraculous powers. Note the plastic bags full of material that one person is planning to rub for family and friends.

This sense of faith of pilgrims is quite something to behold. Prayers over the various areas and sites in the church and incredibly long lines to visit the tomb within the church. 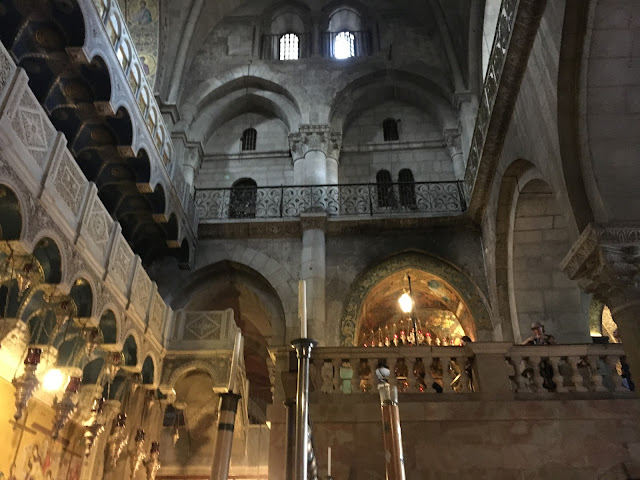 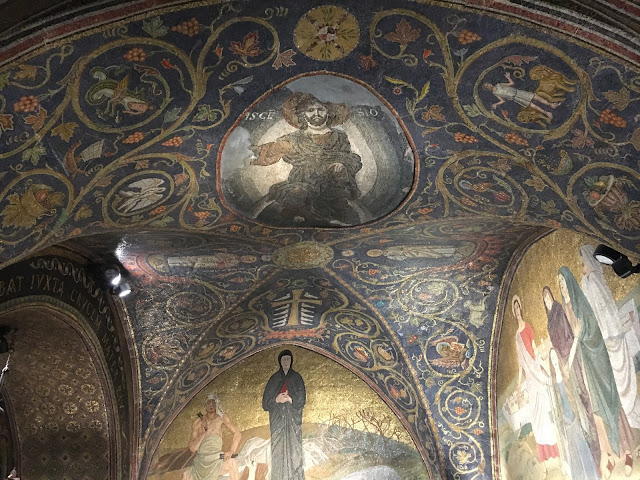 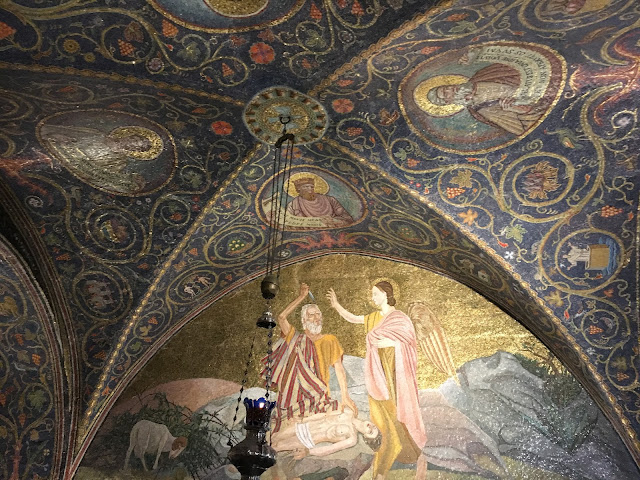 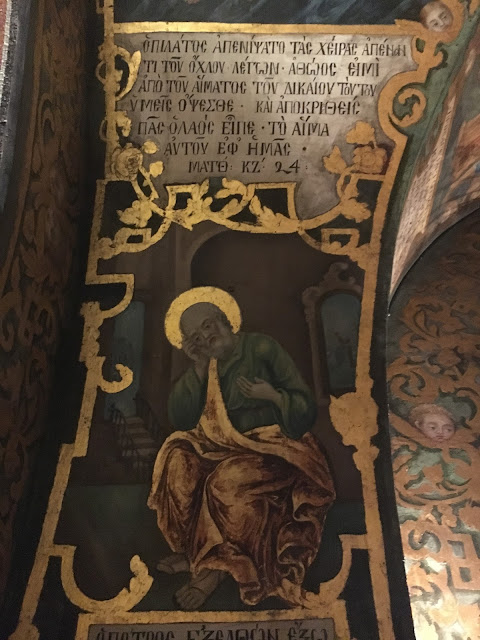 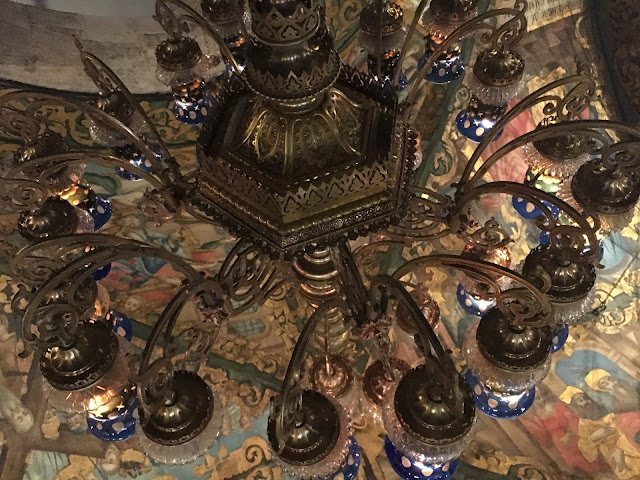 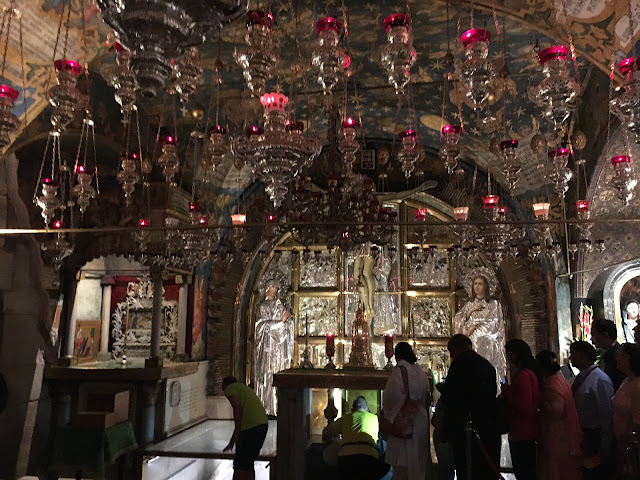 Text and photographs by George Parks
Sources are embedded in links

Popular posts from this blog 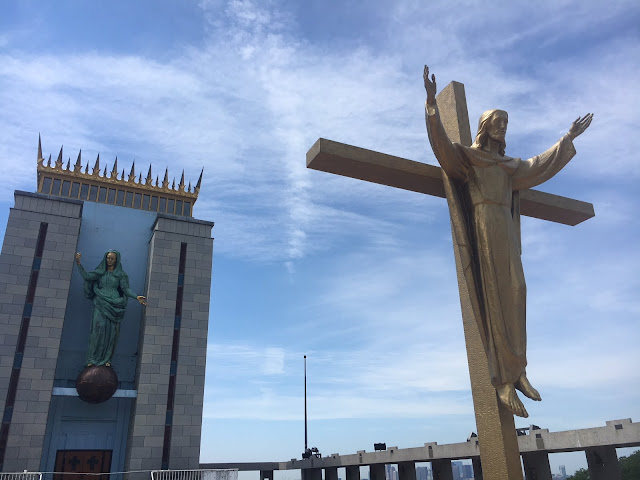 Madonna Queen of the Universe National Shrine, East Boston, Massachusetts
Pillars & Foundations was initiated as an exploration communities as well as faith through religious institutions. My intent is to share experiences, and spread the positivity that I observe. Faith centers embody a drive to make a difference which they deliver upon, regardless if it is with one person looking for hope & community, or a recipient of their expansive charitable work.

This post took to the fringes of what I'd consider my neighborhood, and shows how much there can be to see right in our own back yards that we take for granted. For many years the sign on the side of Rt. 1A intrigued me but I never took the time to explore it. For whenever I saw it, despite being a twenty minute drive away, I was headed to a destination, perhaps the airport, or a business along the road. When I began exploring area churches, I finally made a point to research, and the reviews of visitors blew me away, and sti…
Read more 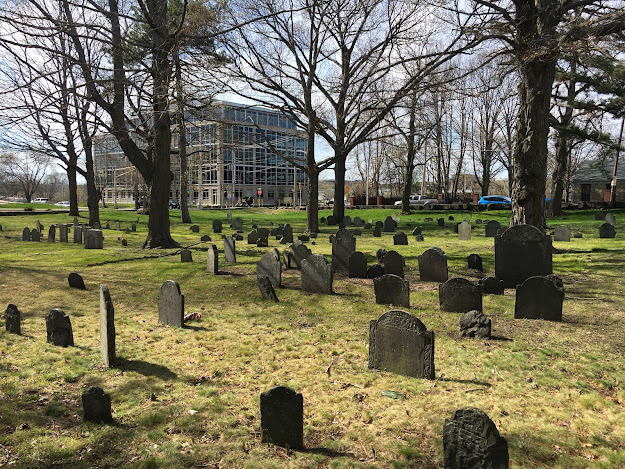 Bell Rock Cemetery in Malden is also known as the Old Burial Ground, and apparently according to Find A Grave, "Sandy Bank Cemetery," originally, for which there is a Wikipedia page. According to Wikipedia it was placed on the U.S. Register of National Historic Places in 1981. Also of note, apparently the headstones and their engravings have been well documented and are searchable in the Malden Public Library. For those familiar with the layout of Malden Massachusetts its location would likely be surprising, several blocks away from what is currently "Malden Center," on the side of a hill in a relatively low lying area. The neighborhood today is comprised of dense residential approaching the Malden River and flanked by the MBTA train tracks and some industrial zones.


The first meeting house of Malden was located near the cemetery, on Bell Rock hill, formerly called Bailey's Hill. The oldest headstone in the graveyard is said to date to 1670.
Pleasantly this ceme…
Read more 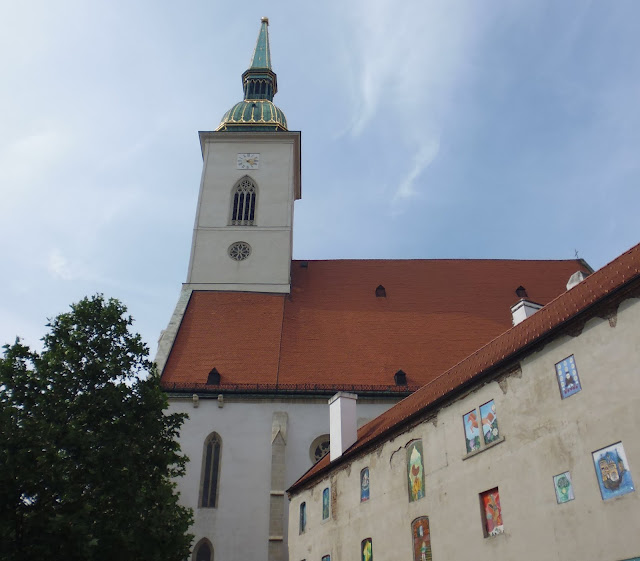 This past spring I had the pleasure of going on a central European vacation with my wife, and amongst my fondest memories was the time we spent stopping in Bratislava on a trip bookended by several days Budapest and Vienna.
Bratislava is not to be overlooked. This small European capital city of Slovakia is unique not just for the stark juxtaposition of Medieval architecture and ultra-soviet era modernism that slashed through the city without regard, but for the warmth of its people. Be it taking a tour of the modern apartments and civic buildings in a Soviet era Skoda (car), or meandering through the old town and hiking to the castle, you can't help but fall for the allure.
But I digress, this blog is about Church Crawling and so I should share that major aspect of the trip. Sadly I did not get photos of the famed Blue Church (St. Elizabeth's) as it had very limited hours and we chose to prioritize the previously mentioned tour, and a day trip t…
Read more 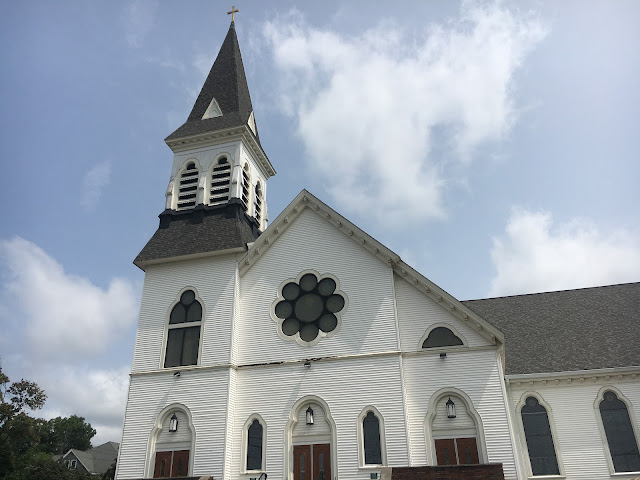 Saint Patrick Parish, Stoneham, MAPillars & Foundations documents an exploration of communities, as well as faith through religious institutions. My intent is to share experiences, and spread the positivity that I observe. The hope is to provide a window into these organizations allowing those who might not other wise venture in to appreciate these thoughtful, often intimate groups in our midst. Faith centers embody a drive to make a difference which they deliver upon, regardless if it is with one person looking for hope & community, or a recipient of their expansive charitable work.


Building & HistorySt Patrick Parish has a very different feel depending on which angle you are observing it from. The view above is the traditional front of the flower shaped window gives the feeling of a country parish. In spite of Stoneham's close proximity to Boston, their are still portions of the town that are very quaint, leafy and idyllic. Not far from a picturesque New England tow…
Read more 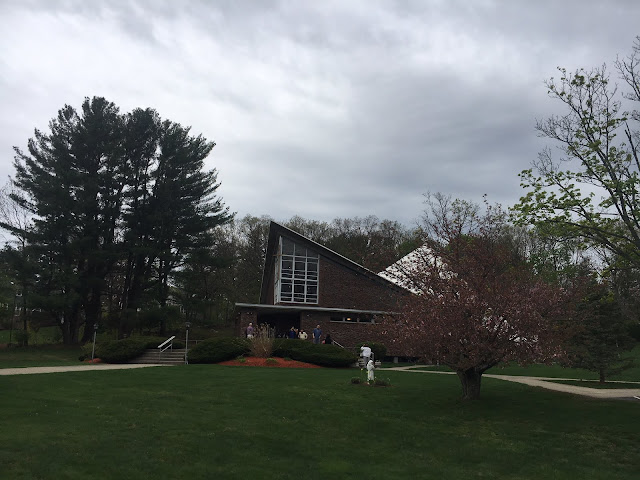 I intend to explore and experience the services of many different churches, predominantly near where I live in Massachusetts. Discovering all of these different faith communities builds my knowledge of the neighborhoods around me and the people who live there. These institutions are important, often overlooked and even misjudged centers of our communities that seek to make a positive impact on their participants, as well as others through their generosity and public service. It is possible that through this activity I may eventually consider a long term relationship with one of these pillars and foundations of the community, however I am eager to do a lot of exploring first. History & Building

I was pleased to find that Saint Athanasius has an excellent write-up on their web page about their parish history. The parish is fairly new when compared to many I have visited, establishing in 1960, and their unusual, modern church structure was…
Read more